Last April, 14-year-old Olivia Beresford strutted down a runway at the Boulder Theater dressed in a black fringed skirt and jacket combo. As she gracefully raised her arms to let the long fringe dangle, the crowd in the sold-out theater went wild. She responded, flashing peace signs at the crowd. Later came 12-year-old Claudia Holder gliding down the runway in an ethereal white gown, the skirt covered in delicate handmade rosettes.

While this may sound like a teenage fashion show highlighting the latest in prom and party attire, it is actually Recycled Runway, the culmination of a design competition for middle and high school students who create high-fashion garments out of found and recycled materials. The fringed outfit? It was made of old bicycle tire tubes and discarded chocolate wrappers. The white gown? It was made of tossed-out tissue paper from Vans shoe boxes. Other fashions have been made out of discarded yoga mats, old race bibs, and used tea bags, to name a few.

The Creative Lab at Common Threads in Boulder, co-founded by Libby Alexander, is the force behind Recycled Runway, and this year marks the ninth year for the show. Veteran designers Tanja Leonard and Rachel Lubanowski act as mentors to the participants each year. The young people who are accepted into the program not only learn about design and creation (how does one sew old tire tubes together anyhow?), but also gain confidence and perseverance that they carry with them into the world.

“Every year the participants surprise us with their abilities,” Leonard says. “The creativity and problem solving capabilities that they exhibit blow us away.”
The students have transitioned from using easier-to-work-with materials like old newspapers and grocery bags to items like discarded CDs, X-rays, and computer cables. The added bonus is that these materials are more difficult to dispose of and would normally clutter landfills. Instead, they’re used to create couture, Colorado-style—with some rugged natural beauty, smarts, and sustainability.

Nancy Holder, whose daughter participated in Recycled Runway for the first time last year, feels the program builds self-confidence in the young participants during the often-trying tween and teen years. “The event cultivated my daughter’s passion for art and design and gave her endless opportunities to self-advocate, which is invaluable,” Holder says.

Ann Roth, another parent of a past participant, says that despite her daughter’s initial apprehension to walk the runway and answer questions in front of hundreds of people, her confidence grew as the weeks continued.

The sense of camaraderie and peer support among the designers was also integral to her daughter’s experience. “The other participants’ support meant so much. And watching her walk the runway with such grace and answer questions with ease was thrilling,” Roth says. 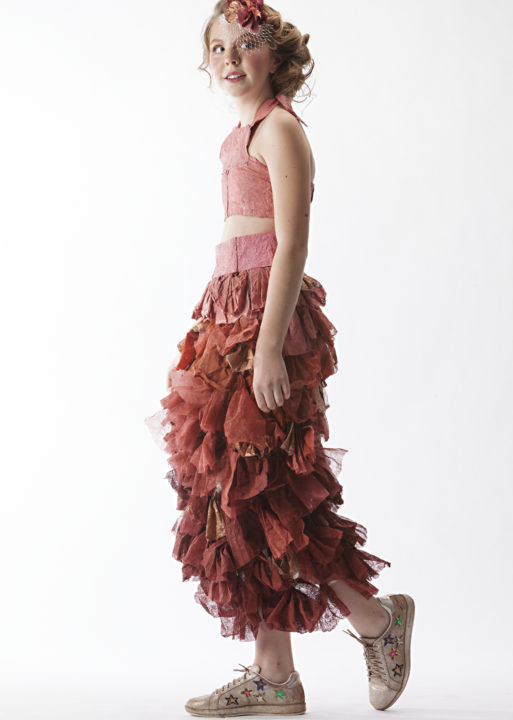 Futures in Fashion and More

The show has also served as something of a catalyst for these kids as they begin to think about their future career paths. Many have gone on to notable design schools like the Fashion Institute of Technology (FIT) in New York City and the Maryland Institute College of Art (MICA). Some have landed internships at well-known design houses like Anna Sui and Rebecca Taylor.

Stephanie Beresford’s daughter Olivia participated in and won the high school division of Recycled Runway in 2017. “The entire process—from the initial drawings to the final product—has inspired Olivia to consider fashion design as a career for the future,” she says. “She even took part in a weeklong design course at New York’s Fashion Institute of Technology on a family trip to New York City last summer. If it wasn’t for Recycled Runway, I don’t know if she would have had the opportunity to discover her true passion!”

The young designers dedicate hundreds of hours throughout the dark nights of winter and into the brighter evenings of spring. Finally their creations are ready to hit the runway in April. The final competition and fashion show, which often sells out, is a feast for the eyes and the mind. The designers turn out garments that rival those seen on the catwalks in Paris and New York, only a bit more trashy, in the best sense possible.

Net profits from the show are donated to a local nonprofit each year. For 2018, Blue Sky Bridge, an organization that advocates for child abuse victims, will be the nonprofit recipient. The enduring charitable spirit helps propel the competition’s popularity.

“Having kids learn to adapt their ideas through the dual lenses of conservation and fashion while using resourceful ingenuity to create recycled garments from scratch gets them thinking about consumption and the origin of things they buy and wear,” Alexander says. “They learn how to make the seemingly far-fetched entirely possible.”