As a little girl growing up in the San Francisco Bay area, Robin Hall loved animals. She’d rescue worms stranded on sodden sidewalks, guide pill bugs back to the safety of the grass, and once nursed a bird that had flown into her window back to health. “Every creature was always so important to me,” she says. “Now seeing the horrendousness that climate change is doing to the animals, it’s really heartbreaking.”

These days, Hall’s passion for preservation extends beyond animals to the planet as a whole, a pursuit that takes center stage with Town Hall, the sustainable kids outdoor apparel brand the former director of sustainability for Smartwool launched last November with Joe Solomon and Jay Lambert. Not only does Steamboat Springs-based Town Hall take green steps throughout the production of their gear, it also has its sights set on something bigger: instilling a desire to protect the earth in future generations. “Our vision statement is we want every kid to love outside,” Hall says, “And we think that if every kid loves outside, they’re going to be healthier in mind and body, and they’re going to fall in love with the outdoors even more, and so they’re going to want to save it.”

Leading by example, the brand has integrated its earth-minded values into its very foundation. As a Public Benefit Corporation that’s “planet positive,” Town Hall plans to provide greater benefits to the world–especially their corner of it in northwest Colorado–than it takes. “That means doing every single thing that we can in every decision … to have as minimal an impact on the planet, meaning greenhouse gas emissions, as possible,” Hall says. Once their emissions have been whittled down to “very, very, very little, we’ll buy carbon offsets to get us not only back to zero and neutral, but to go above and beyond and actually be helping the planet.”

In practice, that means committing to purposeful design and materials “and not just creating more stuff to create more stuff,” Hall says. To that end, each product they make contains at least 75% recycled materials. Take their neck gaiters, for example, which are made with 92% recycled polyester (which is often salvaged from plastic water bottles). The down fill, interior liner, and exterior of their pint-sized puffy jackets: That’s all recycled too. Their ambitious goal for 2024: Make all of their products entirely from recycled materials. 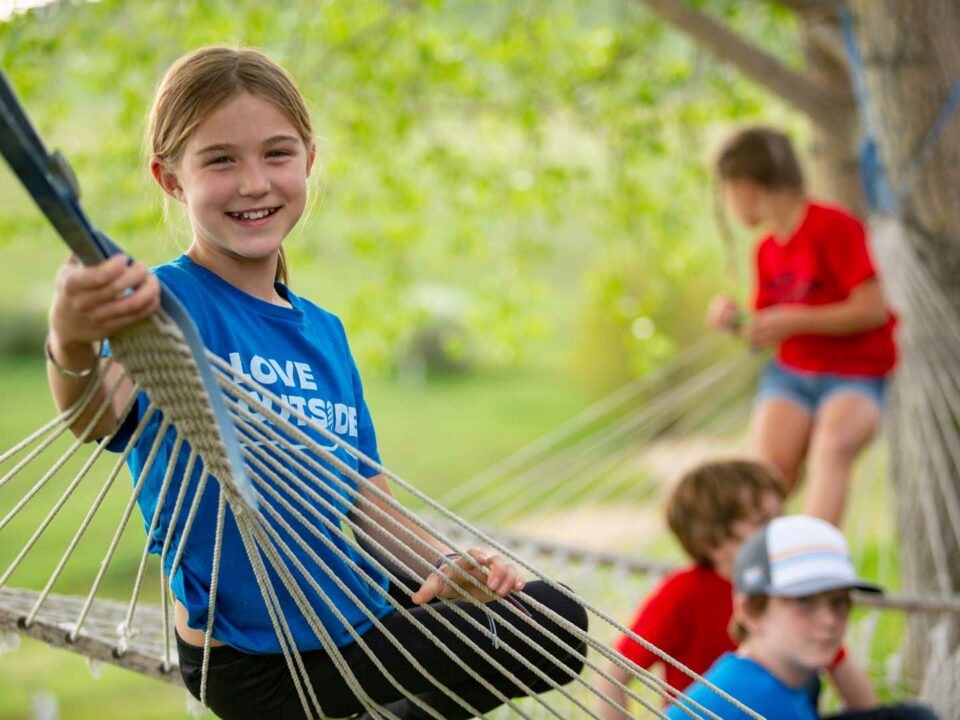 Reaching the Next Generation

Hall happily reports she’s seen the idea resonate deeply with kids. “When I say, ‘This piece is made out of recycled plastic bottles,’ they just get so excited,” she says. “It’s striking a chord with kids and it’s working and it’s good for the planet.”

But it’s not just Town Hall’s products that make Mother Earth happy; it’s their packaging as well. Order their Mountain Town Winter Pants, and they’ll come tied with a single piece of recycled hemp twine rather than encased in a plastic bag. You’ll find a note printed on recycled paper rather than a bulky plastic hang tag. These strategies comply with their promise to eliminate plastic from consumer packaging.

Importantly, all of these sustainable efforts are made without sacrificing product quality. In fact, durability is another of Town Hall’s earth-forward tenets since gear that lasts longer stays out of the landfill longer. “Kids are bomber on their stuff, right? They put it to its test,” Hall says. So they reinforce their garments in high-wear areas and then “make sure we’re testing the heck out of it,” Hall laughs, to confirm it will stand up.

Their snow pants also come with “grow cuffs” on the ankles, a feature that allows the wearer to get an additional year or two out of the garment. Once the little ripper does grow out of the piece, parents can “hand it up” to their next child, Hall explains. Instead of uninspired hand-me-downs, Hall hopes that kids are excited to inherit Town Hall gear. That’s why instead of a single line under “this coat belongs to,” Town Hall gear has four.

Though the brand is tackling significant global issues, Hall’s loftiest goal is actually quite simple. “How many times as a kid did your parents say, ‘Just go play outside.’? That’s what we want,” she says. “We just want kids to go run around and play outside and breathe the fresh air for the good of them and for the good of the planet.”